Mae Salong is an oddity in Thailand. It is a Chinese village high in the mountains of northern Thailand. Its history is an interesting one, and one that I’ll get to in a moment. I spent the night before in the sleepy riverside town of Tha Ton. In the morning I caught the 8:30 songthaew from the dirt lot on the edge of town. A songthaew is pickup truck with benches and a roof overhead. I climbed in and sat across from the only other passenger: a monk. He had a round face, shaved head and wore a saffron robe. He carried with him only a shoulder bag of the same color.

Along the Kok River, the road opened into a plain where fields were being worked. The songthaew drove slowly in case anyone needed to be picked up. We passed women of hill tribes, who usually wear traditional dress. Eventually, a few villagers got in: one woman with a large basket of produce, probably to sell, and another elderly man who took a long look at the pages of my English-language guidebook. They all carried colorful woven bags around their shoulders. Mae Salong is a village of ethnic Chinese from Yunnan Province of China. They once made up the Nationalist (Kuomintang) Chinese Army 93rd Division. Resisting the Communist takeover of China, they eventually fled to Burma to continue their struggle. They ultimately settled deep in these mountains north of Chiang Rai, their present location. They were not put off by thick jungle and steep mountains and started to grow opium to fund their continued resistance. Eventually Thai authorities cracked down on this and built a road up to their settlement to “civilize” them. They swapped opium for tea—which was brought from Taiwan, well-known for its high mountain plants. Now the residents take night courses in Thai to further assimilate.

After weathering a downpour, I stopped for lunch at a café named Chinese Yunnanist Noddle Shop. There I met a young independent Chinese traveler—a rarity as most Chinese travel in groups. He was from Kunming and conversing with him only furthered my fixation with China. He helped me with a translation of one of the ingredients of my lunch. I asked the woman who prepared it, but we didn’t understand one another. It was the green and slightly fermented spicy vegetable served with fried noodles, pork and broth. Then I pulled up a chair next to him. He went on to explain much of the contemporary social norms that keep his peers from traveling abroad the way he does.

After an hour, I decided I had to keep strolling through town to see what else I could see. The village teeters on a ridge and there are wonderful views of tea fields and other agriculture in both directions. Narrow roads break off heading out to various hill tribe settlements. 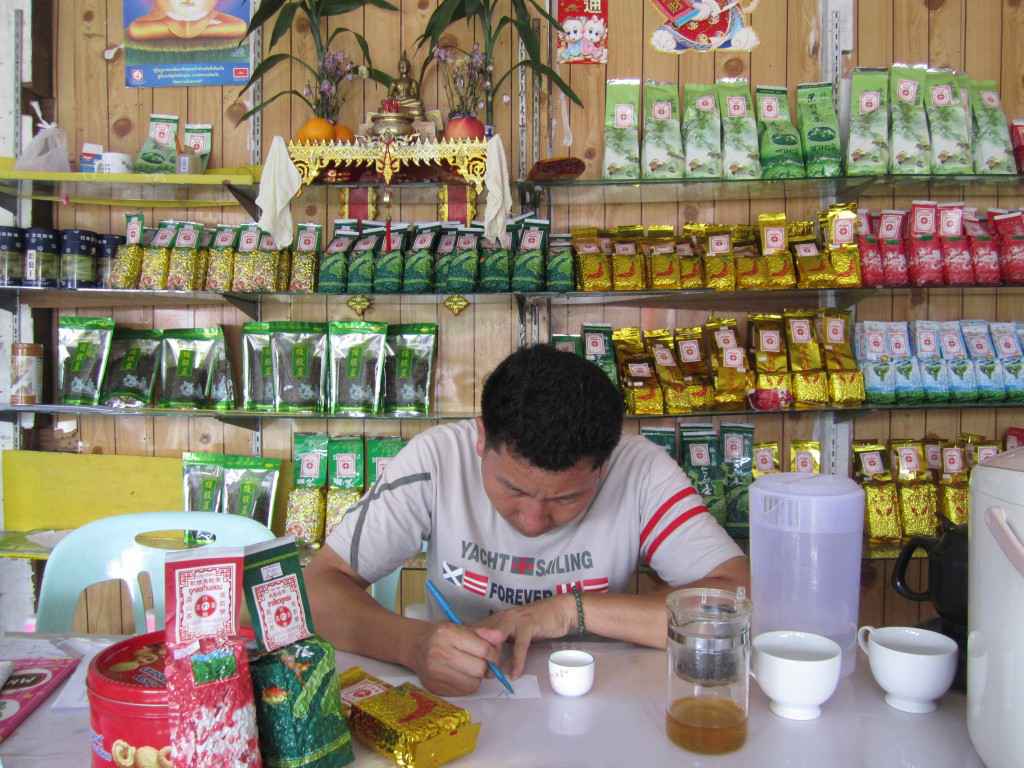 The tea salesman is writing out brewing instructions for me.

I passed a few small-scale tea processing plants. They are one-room, do-everything factories that open to the street and I peered inside to see young men and women spreading tea to be dried, sorting it, and preparing the leaves to be packaged.

On my way out of town, I stopped at one of the many tea shops. There seemed to be quite a few for such a small village with almost no tourists to be seen. They must get more of a crowd in high season. I pulled up a chair and the salesman invited me for a tasting. He individually brewed me a taste of oolong, green-oolong, and oolong ginseng. I asked him about the brewing times and temperatures, took notes, and left with two 250 gram packets. Back at the bus stop, I boarded a songthaew, and we wound our way down the mountain and into the river valley returning to Tha Ton.