Photo from the Road: Fruit Vendor at the Market, Colombia 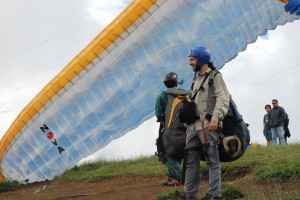 Stephen getting ready for lift off

I had intended on blowing right past Sal Gil on my way to some colonial villages to the north of Bogota. But I’m so glad I did not. San Gil has emerged as the adventure sports hub of Colombia: whitewater rafting, kayaking, caving, rappelling down waterfalls, paragliding, and hiking. It can all be done here. I had thought that I didn’t want to waste time doing something that could be done anywhere during my limited time in Colombia. But that thinking was foolish.

I went ahead and decided to check San Gil out. The bus dropped me off outside of town and I found my way to Macondo Hostel, where the owner, Shawn, set his laptop up on the counter and started a slideshow of the all the cool things that could be done around the area. I decided to give paragliding a chance. And I definitely made the right decision. 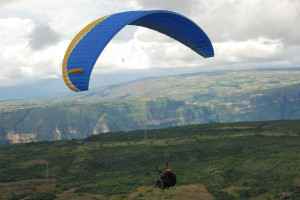 Paragliding near San Gil, Colombia with the Chicamocha Canyon in the distance

About a 45-minute drive outside of San Gil we turned off the main road and drove to the top of a hill—a very big hill. I was joined in the back seat by Larry and Carlyn who were also staying at the hostel. Larry, I learned, is actually a paragliding pilot back home in Southern California. He trained in Venezuela a few years ago but didn’t bring his paraglide because of space constraints.

“There are very few places you can do this.” Larry explained to me as we looked out from the top of the hill towards the Chicamocha Canyon. “The wind has to remain at a constant speed, between about 10 and 15 miles per hour.” And that happens to be true on the windward facing slope of this hill. Below us are forests and fields of tobacco and coffee. It’s slightly cool because of the breeze, and one at a time we get strapped into the tandem paraglide and liftoff with our pilot situated directly behind us. 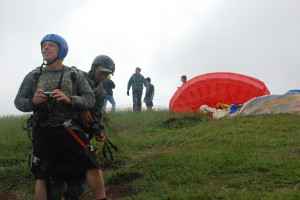 Larry is impressed. He stands with his arms folded and has a smile on his face.  “You could just hang out and paraglide up here all day.” Carlyn and I are having a blast too. But she is a true thrill seeker and handles the downward spirals much better than I do.

I was surprised to learn that we land and takeoff from the same spot. Two guys help the paraglide fill with wind, and then you’re up and stay up there cruising back and forth and up and down. After diving really fast, the pilot jerks the cords and we immediately get pushed right back up to where we came from. It’s an awesome rush, but after 20 minutes I’m ready to be sitting stationary on the earth, giving my head and stomach some relief.

Larry tells me our pilot’s done some gutsy moves. “I wouldn’t have tried a lot of those.” He says. “They’re good pilots. And the equipment is good too, much better than what I used in Venezuela.”

All in all it was a thrilling experience for 60,000 Colombian pesos, or about $33 US including transport. Dirt cheap compared to the $150 it costs back in the United States.

Back in San Gil, I lingered for another two days, which could have easily turned into four or five if I had the time. It’s a nice enough town to visit, built on a hill along one side of the River Fonce. Definitely a place in Colombia that I would check out again.