The Wheels on the Colombian bus go…

The Wheels on the Colombian bus go… 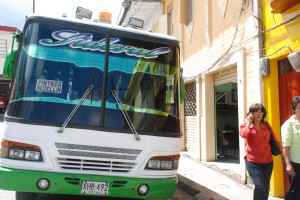 Our bus from Salamina to Medellin

I’m going to dedicate this post solely to Colombian bus rides, focusing on one ride in particular. How does an 80 km (50 mile), 4-hour bus ride turn into a 10-hour trip? Welcome to Colombia in the rainy season.

Our bus driver is stressed. I can tell by his furrowed brow. He steps out of the bus and smokes a cigarette. We are stopped in our lane, on a curve, about 10 miles up a mountain road. We get word from two guys hawking cold drinks from their motorcycle.

“It’s backed up 15-20 minutes.” They have just seen the problem. It’s a landslide—a not uncommon problem from September to November, the rainy season here in Colombia.

Nobody is moving, except those cars in the opposite lane which we find out have turned around. The bus driver finally admits defeat and asks us for our authorization to join them and take the much longer route to the west, avoiding the landslide. We agree and make our way back to where the road forks at La Pintada. 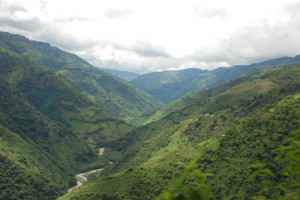 A view from the bus after leaving Salamina

A week-and-a-half ago this leg of my journey started in the southern Medellin bus terminal. I had a ticket in my hand for Popoyan, a gorgeous white-washed colonial city on the way to the Ecuadorean border. Our 5pm bus was already 40 minutes late. I took a seat near the middle of the bus. As we pulled out, the young guy next to me made the sign of the cross. This is never a good thing to see before a long and uncertain journey.

Two hours into that ride I was swearing that I’d never take the night bus again. What is wrong with me? I thought. Am I getting old? Ten years ago I could handle—I’d even look forward to—these types of journeys. Now at 30, recovering from a cold, in a new country that I had just arrived in, I was miserable. I was beginning to get dizzy. All I could think about was the bus pulling into its final destination. Besides, I’ve never gotten motion sickness. Why this night? 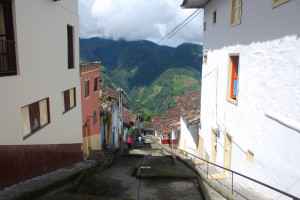 A street in Salamina, Colombia

But I have never been on a South American bus ride. That is my only problem. This is all quite normal actually.

Then we started descending—accelerating when we got the chance—across the double yellow line to pass the 18-wheelers in the short straightaway sections that appeared. As soon as we passed—if another vehicle hadn’t come straight on at us—we slammed on the brakes and got back in our lane in order to survive the next dangerous curve. This continued for the next hour, descending what seemed to be 1,000 meters.

At 2 am we stopped in some city’s bus station. I stepped off for some fresh air, then boarded again. A woman came on the bus, made an announcement and walked down the aisle with a video camera. I was supposed to be looking at her and the camera, but I failed to understand what this was all about. Another South American formality I didn’t know about—taking a video of all the passengers onboard in case the bus tumbles off a cliff and families need to be notified. 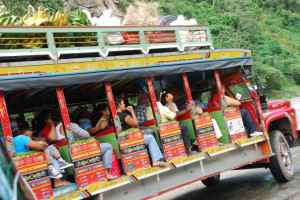 A Colombian Chiva, which transports goods and people from village to village

At 3am we pulled into a gas station and they shuffled us on to another nearly full bus. This new bus had the air conditioning blasting and everyone onboard was wrapped up in winter coats and hats with blankets spread on top. I was not prepared for this and shivered for the next two hours while everyone else slept. Outside, fruit and vegetable vendors in t-shirts or long-sleeved shirts were setting up their stalls for the morning in the comfortable outside temperatures.

But back to today and that landslide…The bus driver promises that we’ll arrive in Medellin by 6:30pm, going the longer route around the landslide. During the 20 minutes stop in La Pintada, I grab a quarter of Papaya from a street vendor while the bus driver tries to round up some more folks to compensate for the extra fuel we’ll get an hour from now and it won’t be until 8:15pm when we’ll arrive at the terminal where I started over a week and a half ago.

See photos from the bus ride through the zona cafetera, or coffee country of Colombia.