A Walk Around Freiburg Germany

Why, How, and Where to Travel in Malaysia

The Best and Worst of Being a Digital Nomad

Freiburg lies on the edge of the Black Forest. But even right in the city, there is a good network of walking trails. I got a taste of these later in the afternoon on the day I visited, climbing the hill above town for sunset. A few hours before that I followed Rick Steves’ recommended walk around Freiburg. First stop was the town hall, with its sister city mosaics neatly displayed on the sidewalk in front. Next was to recognize the miniature canals that run through the city, built as a way to fight fires in medieval Freiburg. You can’t miss the massive Munster. Take a peek inside then study the exterior and its fantastic gargoyles. If it’s morning, you can climb the tower.

Outside in the square, a market runs every day except Sunday. When I visited there were still 2 or 3 vendors set up, a woodworker and a florist. Behind the piles of wood shavings was a sausage cart and I got myself the traditional long red sausage of Freiburg – Bratwurst mit Brötchen. It was good, loaded with or without onions, on bread. I put a little bit of curry ketchup on it, eating it on the edge of the fountain with a view of the Cathedral.

Another of Freiburg’s charms is the little mosaics outside shops that show a picture of what they sell inside. The knife shop has a beautiful image of – you guessed it – a knife. Along the route, I walked down a particularly atmospheric street with vines growing overhead. I later learned all types of chain businesses are not allowed on that street. By this time the sun was getting lower and the streets seemed darkened already. This happens in Europe when it’s winter, but is intensified in the old cities where the buildings stand closer together.

Before it got any darker, I decided I’d try to get high above the city on the Schlossberg. You can cross a little bridge and climb your way up. It’s a little steep but well worth it and there are lots of people up there every evening. It was a fantastic sunset.

See more photos from my walk around Freiburg Germany 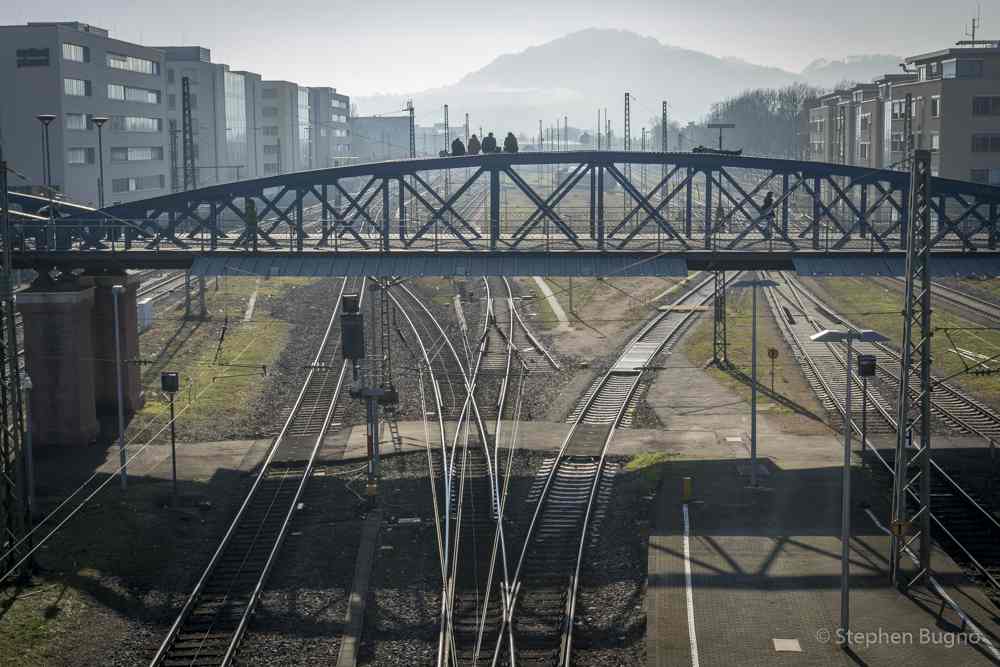 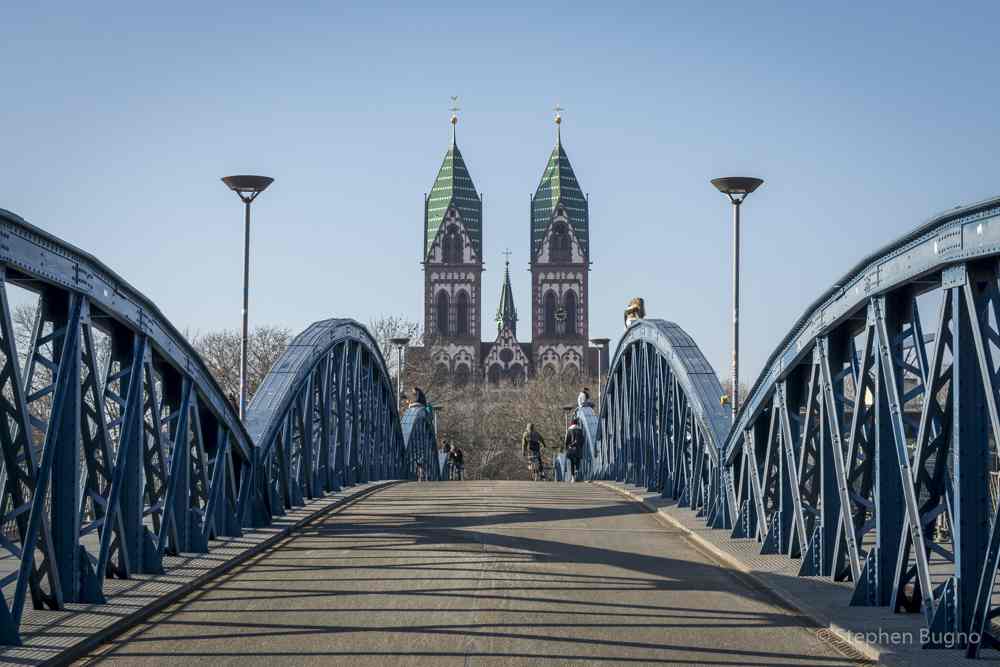 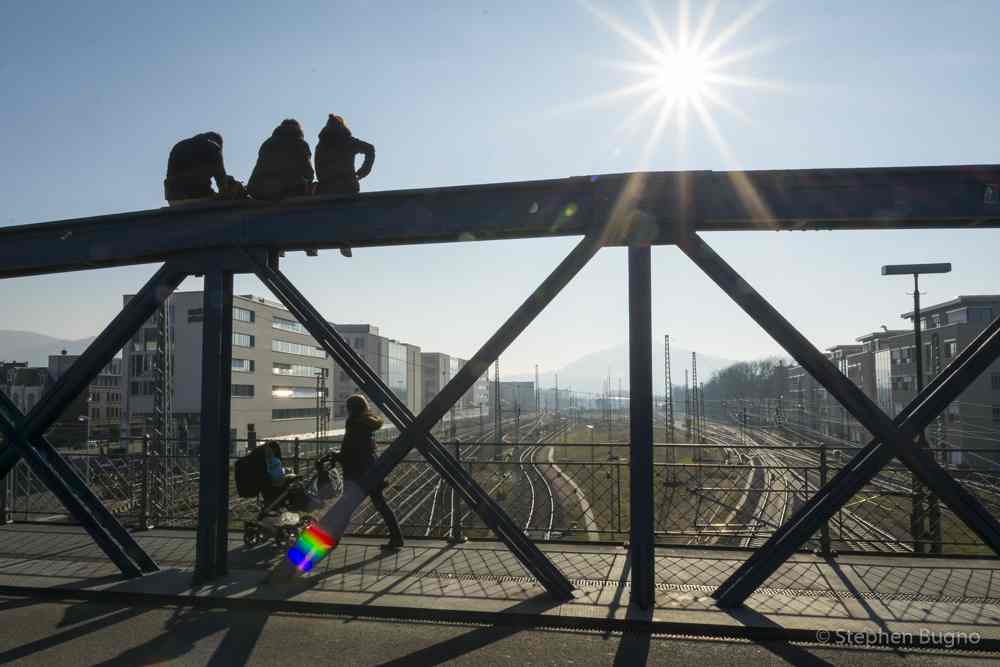 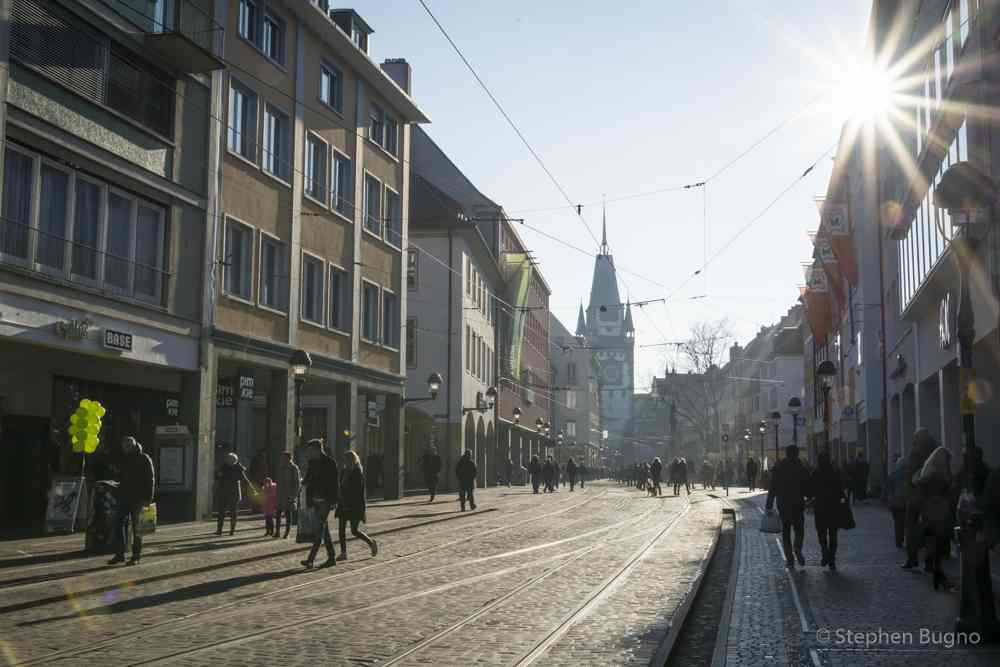 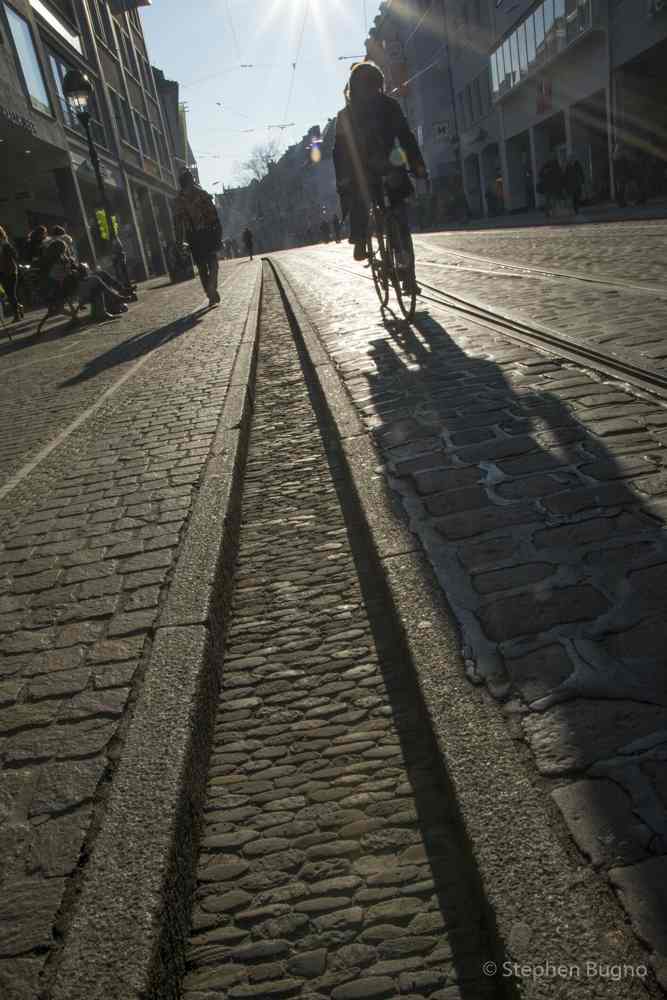 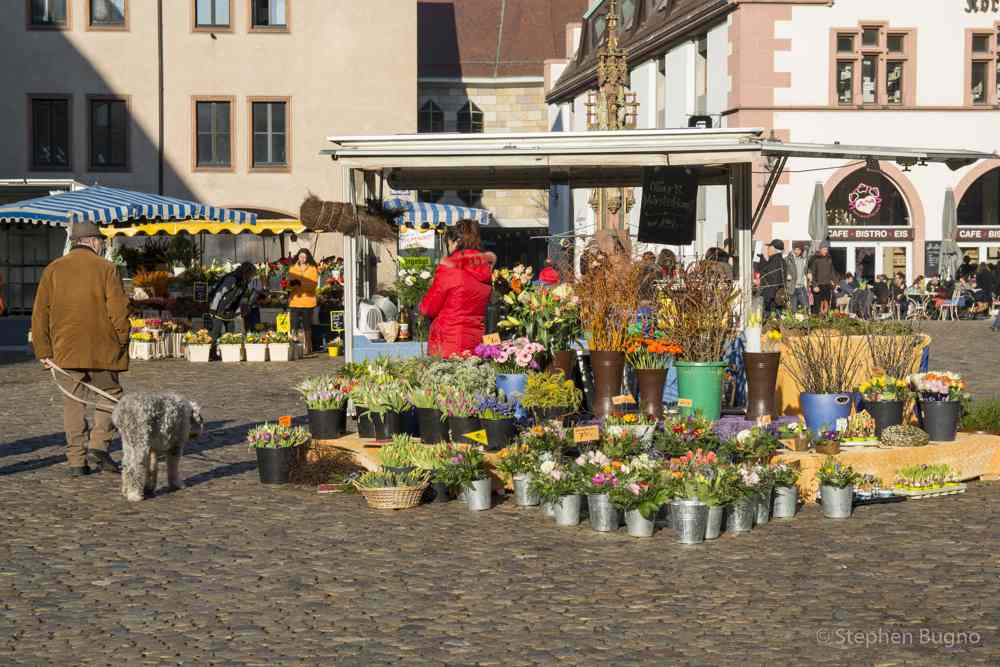 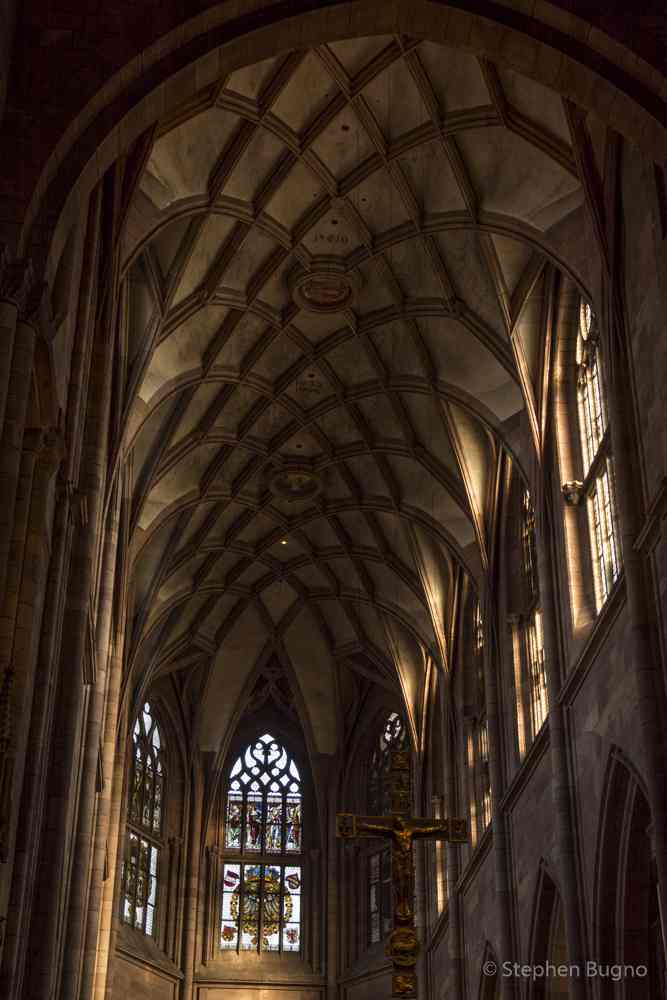 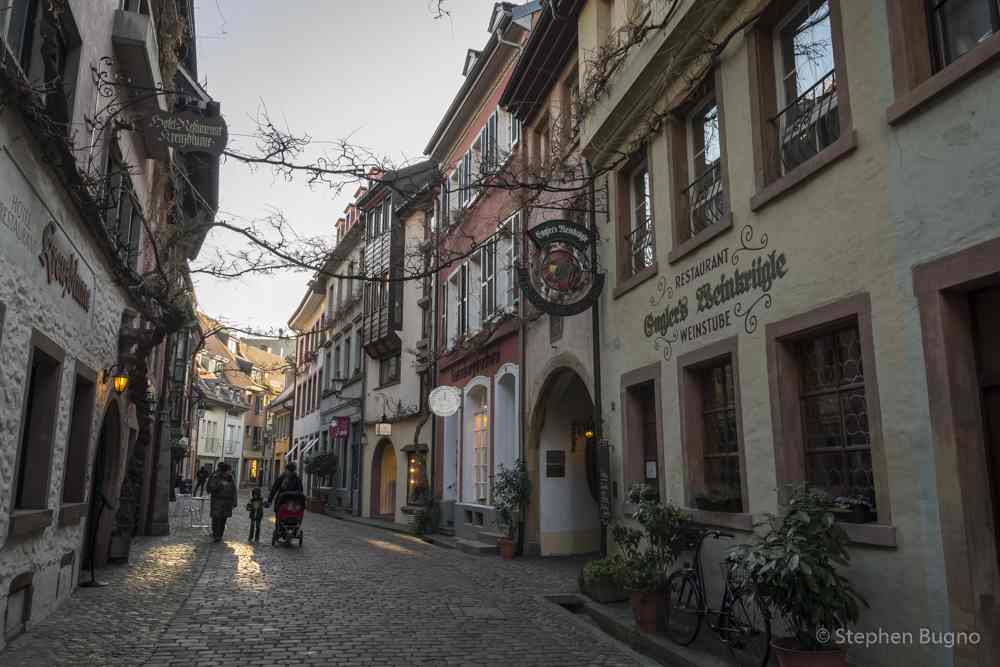 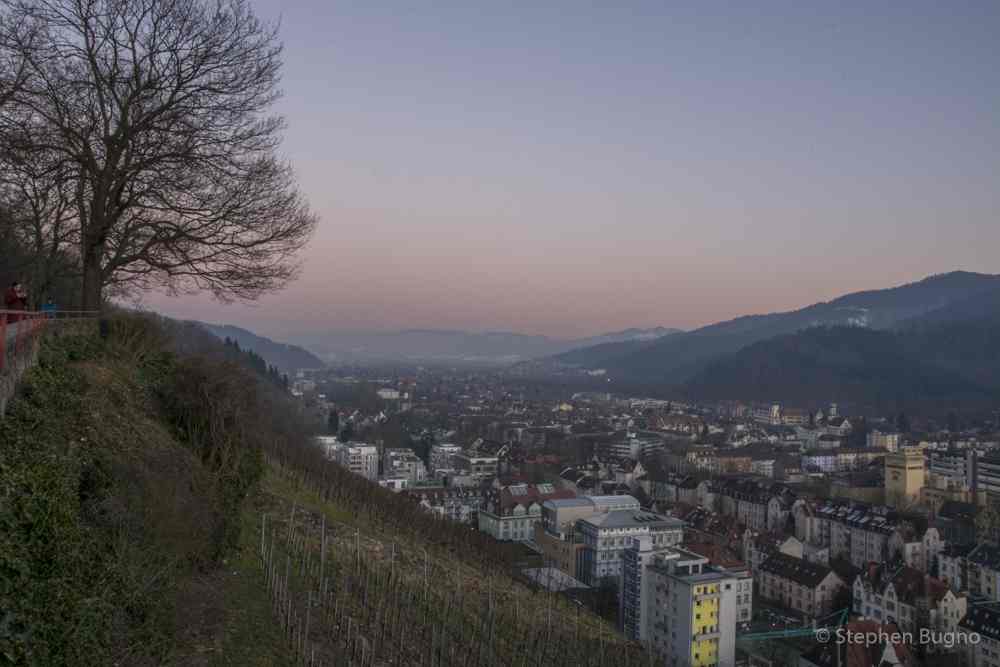 Have you ever visited Freiburg im Breisgau, Germany? What did you think?