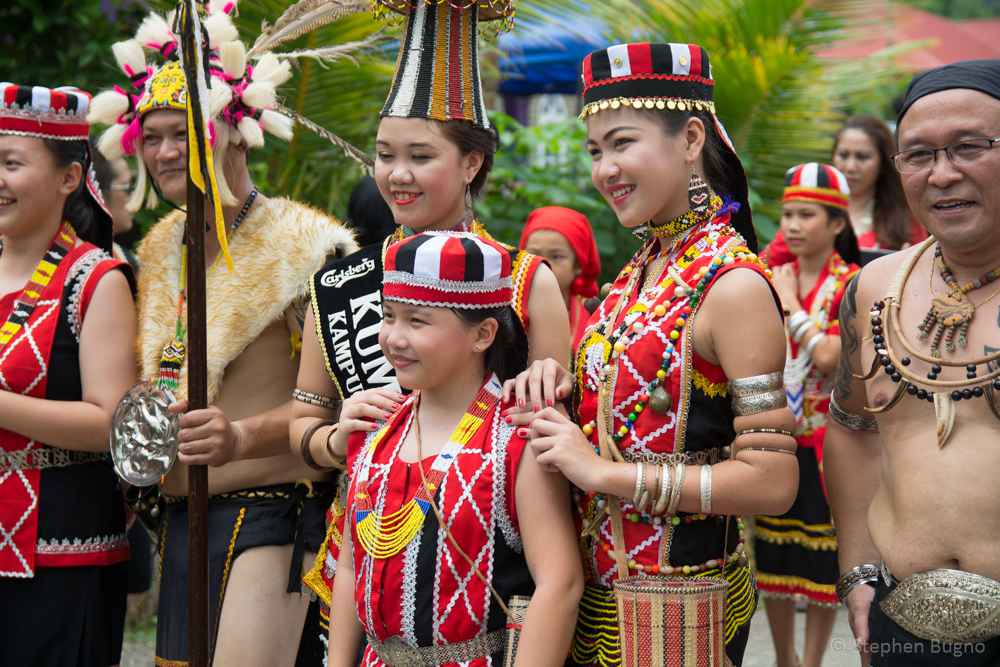 When we received an invitation to Gawai, or the Harvest Festival, we didn’t know exactly what to expect. Our invitation came through a friend of a friend of a colleague. Many of the families who celebrate have an open house for the day. Relatives and friends (and friends of friends) stop in at various times of the day. This is how the Bidayuh tribe of Sarawak celebrate Gawai.

The holiday commemorates the rice harvest. Except today, many of the Bidayuh are not rice farmers. Many have moved into towns or villages, away from their native homes in the jungle. Most used to grow crops in territory carved out of the forest. Today many have jobs away from agriculture. However, Gawai remains the biggest and most important holiday of the indigenous Dayak tribes of Sarawak.

When we arrived, the family welcomed us with snacks and drinks. Traditionally tuak, or homemade rice wine, is the drink of choice. But we were served cans of Tiger Beer and Royal Stout before a bottle of red wine was brought. Gawai is a drinking holiday as we would soon find out.

We were led back outside onto the front veranda where we helped ourselves to chicken rice cooked inside bamboo, BBQ pork, sticky rice, chicken curry, braised chicken in soy sauce, and white rice. We finished our meal and waited for the procession to begin.

At 1:30 pm the procession began, led by this year’s queen and king. The women wore brightly colored traditional dress. The men were shirtless to show off their tattoos and necklaces made of giant teeth. Some wore animal skins. A vehicle with drums proceeded slowly as men pounded the beat. Children followed along. The parade moved slowly, as observers along the side of the narrow village street stopped those to both photograph them, and get photos with them. Other observers were giving out free shots of rice wine. One man had Jack Daniels. Others in the parade drank cans of cheap Chinese beer.

If you’re keen to explore Borneo first hand, join our Adventure Tour of Borneo later this year. Sarawak native, Noel Lau is ready to show you the ins and outs of Borneo.

Here are the rest of the photos from the Gawai celebration and procession through Taee village in Sarawak, Borneo: