Hook Up the Caravan, Hit the Road and Head to These Great Spots

Think of throwing a party, you might think of friends, drinks, food and a bit of music. In Spain they take the phrase a bit more literally (much to the delight of many!), throwing a variety of things during some of its craziest fiestas. When the ants and wine go flying, it’s a fun place to be. On your next holiday to Spain, why not get a taste (literally!) of the action, and learn how to really throw a party, Spanish style. 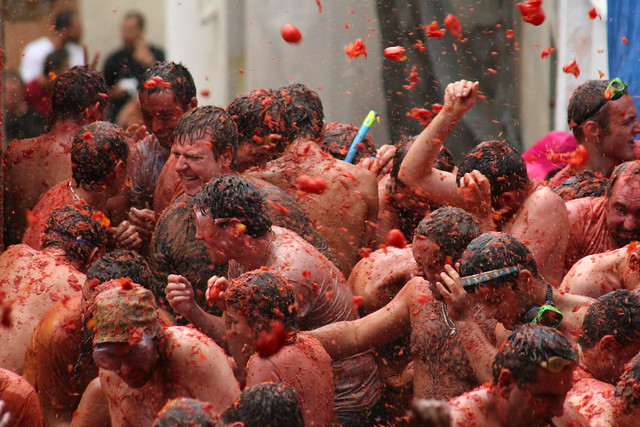 Surely the most famous of Spain’s crazy fiestas, La Tomatina does exactly what it says in the tin— covers people in tomatoes. This festive food flight takes place on the last Wednesday in August, with tourists flocking from all over the world to take part. If you fancy having a go, head to the town of Buñol, near Valencia. More than 50,000 people attended last year — that’s an awful lot of squashed tomatoes. If you find yourself asking “why?”, the answer is that no one’s really sure. People have been hurling tomatoes at each other since 1945, possible because of protesters once pelting councilmen with them.

Staying on the fruity theme, we’ve got the perfect festival for you if grapes are more to your taste. La Raima grape throwing festival is all about celebrating the end of the harvesting season with people flinging bunches of grapes at each other in festive delight. Held in the same region as La Tomatina during August, you could do both of these festivals in the same trip if you’re really keen to get juiced. A staggering ninety tons of grapes are dumped into the village square of Pobla del Duc, whereby chaos commences.

“Batalla del Vino – Haro – La Rioja” by BigSus – Image created by me.. Licensed under CC BY 2.5 via Wikimedia Commons.

If you’d rather scrap the solids and get drenched, try the Haro Wine Festival — unless you’re a wine lover, as you’ll see perfectly good wine poured over people’s heads. Be sure to keep your mouth open at this festival, during which buckets, water pistols and spraying devices are filled full of the good stuff. Wine rains down on the masses atop a mountaintop during a day of celebrations. Join in the pre-party on the 28th of June and enjoy the actual wine fight on 29th.  There’ll be music, dancing, and celebrations for a good couple of days with the whole town turning pink in wine-soaked T-shirts. Clearly, it’s not the time to wear your whites. 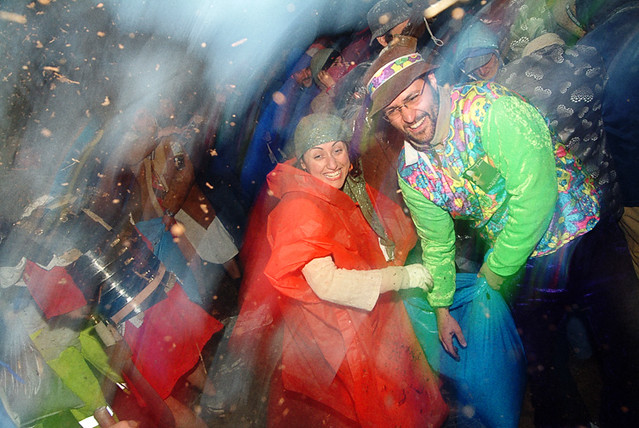 Perhaps this all sounds far too clean and civilized. Maybe running the risk of getting covered in mud and live ants is more to your taste. You can enjoy this treat during the Laza Entroido Festival in the autonomous community of Galicia. The small village is the setting for raucous revelry during the festival, which takes place over five days from 3rd March every year. There’s plenty going on during this festival, which is about seeing in spring after winter, including colorful costumes and masks, flaming torches, and feasting. On the Monday the messy bit commences. Revelers run around with sacks full of mud and live ants, throwing them in the faces, and down the backs, of bystanders.

Now that’s how you party. If you’re tired of civilized drinks and a bit of dancing passing for a party, you may just want to head out to Spain and indulge in juice-, fruit- or ant-ridden chaos. Party on!